Dear John, We purchased and installed a FritsJurgens M32+ closer. There's an electric strike that allows the door to be opened freely without a latch during the day. So far we have been unable to make the door operate the way we want. The door bounces off of the jamb when it closes. Is it possible to adjust this closer to set the door gently into the 0° position without a latch present?" — Newbie from New York.

Hey Newbie, Yours is not an unusual question. Like any finely-engineered mechanism, tuning the System M+ can take some patience and finesse. So take a breath and listen up. Sounds like your pivot door is closing too quickly. Time to get out your handy adjustment wrench that came with your hinge. 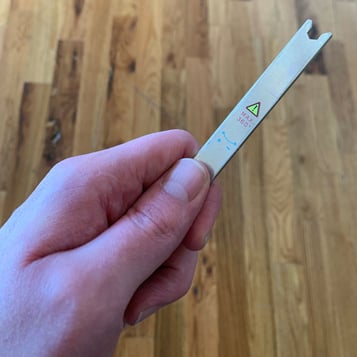 The best way to find the sweet spot with your System M+ pivot hinge movement is to reset all three of your System M+ speed adjustment screws to the "factory setting" and start your adjustments from scratch. Depending on who's been driving your pivot before you, you're better off adjusting the mirrors and the seat yourself before you turn the key in the ignition

To do this, slowly close all three adjustment screws by turning them ALL counter-clockwise until they stop at their closed position—what we will call 0°. No need to torque them hard. You're just returning them to gently back "home".

When I say counter-clockwise, like the photo below, I mean that the hinge is in the door and you're looking down at the floor. (I emphasize this only because I've had conversations with people who imagined themselves a small insect standing underneath the door and looking up at the screw.) Turning COUNTER-CLOCKWISE increases the pressure of the hydraulic fluid which slows down the movement of the hinge. 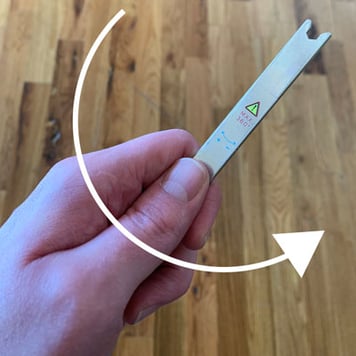 NEXT, cranking CLOCKWISE now, back out the DAMPER (middle screw) to 180°. This is the "factory setting" for the damper.

Well, don't sweat it Newbie, just do three clockwise turns of about 60° and that'll do it.

Look at the tool. See this blue diagram? Think of the negative sign (–) as slowing down your door, while the plus sign (+) speeds it up. 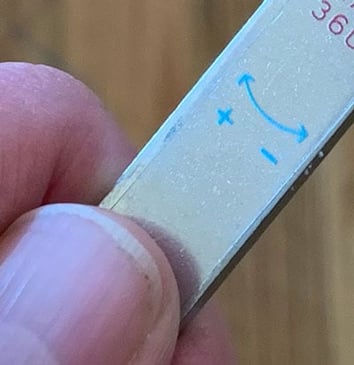 NOW, follow the steps on the M+ Fine Tuning Card here,
Make sure you know which side of the pivot revolution you're on.

Starting with the middle DAMPER (which also affects the backcheck). Here the balance is between how stiff you want that backcheck and how fast you want the door to move between 90° and 30°. Don't worry yet about whether it's bouncing or too slow. You'll get to that later.

Next, turn the SPEED screw out of that zero position. This controls the last 30° of closing. So, say you wanted a heavy backcheck. That would normally slow your door down too much. The 30° SPEED screw allows you to pick up the speed at that point in the movement.

Now, adjust the magic LATCH screw. This allows you to slow down (or speed up) the final 10° of the door movement so that it doesn't bounce. In your case, with the electric strike, the balance will be one of ensuring it latches, but is not pulling it in too fast. You may then need to go back to the 30° adjustment.

Note, Newbie : I'm suggesting starting from scratch and not just fiddling around with the LATCH screw because all the adjustments on this sweet testament to Dutch engineering work together to create a perfectly smooth and consistent movement. Think of tuning a Stradivarius, or a Porsche. Eventually you'll get it.

But, if you have any trouble, you've got our number.