How do you seal the bottom of a pivot door? Just let it roll! For an architect, the idea of a pivot door brings with it a feast of opportunities for playing with scale, spatial dynamics, and materiality. It's almost a cliché at this point, but pivot doors are often described as having the Wow Factor. However, for the door maker, pivot doors also present a host of technical challenges, with sealing against the weather topping the list.

With the introduction of the FritsJurgens pivot hinge systems to North America, our OEMs and custom door shops were quick to see the potential of their new technology. They also saw this turning point as an opportunity to re-evaluate their approach to the entire pivot door opening. Most of their initial interest was in the fabrication of pivot entry doors, for which they had traditionally used brush gaskets and flipper seals for a very basic sealing solution. As the doors grew larger and customers demanded better, the OEMs were looking for higher performance from their seals.


Automatic door bottoms have been used for hinged swing doors for decades. The actuator that protrudes from the hinge end of the door is depressed head-on as the door completes the closing motion. This action is what deploys the seal down onto the floor. But, with pivot doors the same actuator pin sticking out would come to the jamb laterally and either be sheered off or bent sideways, kind of like stubbing your toe. A new approach to pivot door dropseals was needed.

For over 60 years, Athmer has manufactured high-performance drop seals for every kind of door. In recent years their attention had turned to the pivot door problem and developed a unique solution, the SchallEx® L-15/30 WS Pivot which our customers have begun to integrate into their pivot door offerings. 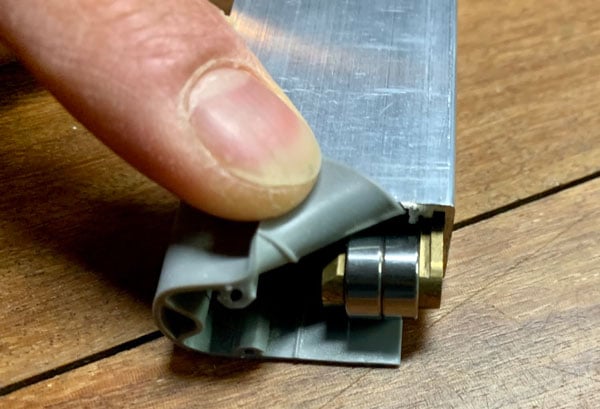 The Athmer model features an adjustable roller actuator which can negotiate the edge of your jamb, wherever the door sits in the frame.

Now, in order for the whole thing to work, the drop seal needs to be mortised alongside the pivot closer body for the width of the door. Obviously, thicker doors are required to accommodate both. This doesn't generally pose a problem as many of these large doors are being engineered on the beefy side.

Using a FritsJurgens System M/M+ or System One pivot and their Standard Floor Plate, you are looking at a minimum 2-1/2" thick door. This is necessary because of a minimum distance (6mm) that is required for the drop seal to avoid a collision with the floor plate in its final few degrees of travel. 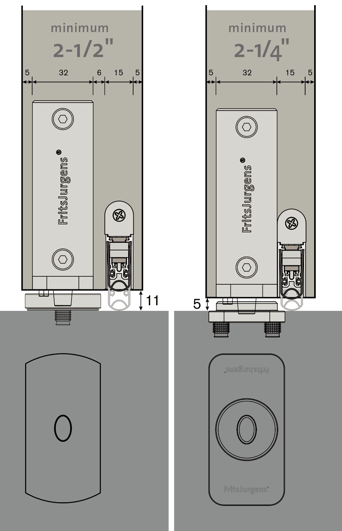 If you use the new Flush Floor Plates you can get the door thickness down to 2-1/4". See my blog post on these new plates, here.

Still, with the pivot closer body offset toward the inside of the door thickness (yes, you can offset the pivot!), your gaps at the jamb can still be 1/8" without a bevel even with the pivot point placed at the minimum 3-9/16" (91mm) for FritsJurgens Systems.

Sure, the roller actuator is cool, but it's what's up inside the door that is really the reason to specify these Athmer dropseals.

The new pivot drop seal is packed with the usual Athmer features :

Now that the FritsJurgens System M+ has changed the idea of a pivot closer, sealing the pivot door is perhaps the trickiest of the remaining challenges door makers have to address. They now have an elegant high-performance solution for the bottom — and the top — of their pivot doors.

Get in touch with me to find out how to get one of these Athmer seals to try out in your next pivot door project.